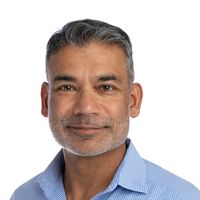 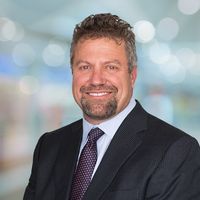 I recently had the opportunity to sit down with Elevate General Counsel and Chief Operating Officer Steve Harmon to discuss his new role and overall philosophy and approach to executing his remit. I was particularly excited about this because of a book I co-authored a few years back called The Generalist Counsel (Oxford University Press). I drew upon themes from the book to frame our conversation. In essence, Steve is the quintessential Generalist Counsel.

Prashant: Steve, congratulations to you and Elevate for your appointment as General Counsel and Chief Operating Officer. How do you feel about this?

Steve: Prashant, I’m excited about this role for a few reasons. Firstly, I continue to lead our legal team, where I feel we have been able to execute our role ’at the speed of business.’ As an extremely fast-growing company, our legal function must enable Elevate to grow as fast as our market and infrastructure permit. Also, now that I am leading all our core operating businesses, I can execute my philosophies of speed and balance in conjunction with ensuring our law department mission. The mission of ‘enabling the business to design, build, and sell its products and services in a legally appropriate way’ is part of the fabric of our organisation.

Prashant: While writing The Generalist Counsel, I had the good fortune to get to know some of the executives reshaping how law departments execute their charter. One of my favourite people is Marla Persky. I knew her when we were both at Baxter and reconnected with her for my book when she was Executive Vice President, General Counsel, and Corporate Secretary for Boehringer Ingelheim USA. When I asked Marla how she believes a General Counsel should execute her role, she said, ‘A General Counsel needs to be a businessperson first and a lawyer second – not a lawyer who understands the business, but a businessperson who happens to be a lawyer.’ Steve, what are your thoughts on Marla’s description?

Steve: Marla’s description resonates with my point of view and my aspirations as a GC. Mark Chandler (most recently, Executive Vice President and Chief Legal Officer of Cisco) was a tremendous mentor to me and shaped my outlook and approach to the role. Very early in my tenure at Cisco, in a global ‘Law Department All Hands’ meeting, he invited our head of Engineering and Products and our head of Sales to present their priorities to the Department. At the end of the presentation, someone questioned whether the time spent should focus on a specific legal topic or risk, etc. Mark replied that being an expert in our legal practice areas was table stakes for us as lawyers. Part of the reason most corporations (at least at that time in 2002) hired only from law firms was to ensure lawyers had experience and legal skills. He then observed that the corporation’s ability to pay our salaries was entirely dependent on the ability of our engineers to design market-leading products and the ability of our salespeople to put those products in the hands of our customers. The Law Department is a tax on the business, and one of the key roles of a GC is to find a way to reduce that tax. Over time, Mark and I distilled that ethos into a mission statement for the Department:

‘The mission of our Department is to enable the business to design, build, and sell its products in a legally appropriate way.’

I brought that same mission statement to Elevate, and it is our governing mission within our Department. To deliver on that mission requires us, as lawyers, to move well beyond traditional legal advice. As we say in our Department, there are no ‘legal issues;’ instead, there are only business issues with legal implications.

Prashant: As I interviewed the senior executives profiled in The Generalist Counsel, I realised they had all taken slightly different paths to get to their seats, but there were some common themes. I was able to characterise these on a matrix of personalities. One axis is creator tendencies, the ability to create opportunities for oneself. On the other is a responder tendency, the willingness to respond to opportunities presented. Both are appropriate pathways, and some Generalist Counsel had both creator and responder tendencies. Here is the matrix. Where would you say you fit on this matrix? 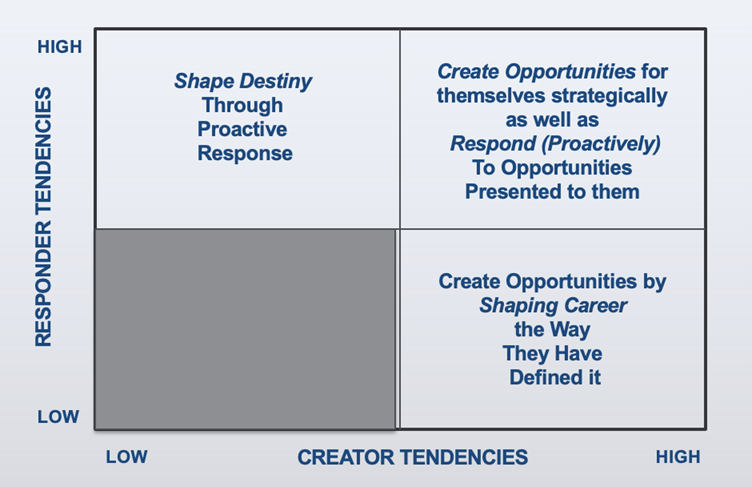 Steve: From my start as a transactional IP licensing lawyer looking for ways to optimise context and non-mission-critical activities at Cisco, I freed myself up to focus on more interesting work (Indirect Procurement). That naturally flowed into a role where Mark (Chandler) asked me to apply my technical background (combining EE with Information Systems) in new ways in the Department. Fundamentally, in the tradeoff between ‘revolutionary’ and ‘evolutionary’ change, I am an ‘incrementalist.’ Given the law’s affinity toward respect for precedent, the approach is very compatible. My approach has always acknowledged the structural challenges in making significant, transformative steps in legal practice. Intuitively, my approach is to assess systems for opportunities to optimise. As optimisations accumulate, opportunities for wholesale strategic shifts naturally present themselves – and the process does not need forcing. Recently I became aware this approach has a fancy name, ‘the aggregation of marginal gains’ (See James Clear’s book, Atomic Habits). In this regard, I would say I am both a creator and a responder. I created an environment where opportunities would come my way, but I also didn’t hesitate to take risks and accept opportunities presented to me. I also ascribe to notions of the ‘law and economics’ approach to law and risk originating at The Chicago School of Economics and formalised by Judge Learned Hand. Simplifying, the idea is to assess the duty of care in negligence cases -- B˂P*L where B = Burden to Act, P = Probability, and L = Magnitude of the Loss. There is no reason not to address other legal problems similarly, absent the existence of strict liability (like compliance). This philosophy, combined with the aggregation of marginal gains, allowed me to demonstrate impact and recognise opportunities to impact the business further.

Prashant: Steve, given that UChicago is my alma mater (where I studied Economics), I love the invocation of ‘The Chicago School.’ Can you give a real-life example of the ‘aggregation of marginal gains?’

Steve: Sure thing. One of my favourite stories is how the British Cycling Team went from not being a world leader in cycling to long-standing domination. Here is an excerpt from James Clear’s Atomic Habits (pp. 14-15), Penguin Publishing Group.

Just five years after Brailsford took over, the British Cycling Team dominated the road and track cycling events at the 2008 Olympic Games in Beijing. They won an astounding 60 per cent of the gold medals available. Four years later, when the Olympic Games came to London, the Brits raised the bar as they set nine Olympic records and seven world records.

That same year, Bradley Wiggins became the first British cyclist to win the Tour de France. The following year, his teammate Chris Froome won the race, and he would go on to win again in 2015, 2016, and 2017, giving the British team five Tour de France victories in six years.

From 2007 to 2017, British cyclists won 178 world championships and 66 Olympic or Paralympic gold medals during the ten-year span. They captured five Tour de France victories in what is widely regarded as the most successful run in cycling history.

This accomplishment is an excellent example of how each win builds upon another and eventually leads to long-standing success.

Prashant: Steve, the ‘businessperson who happens to be a lawyer’ is a pervasive theme of many of your anecdotes. I’d love to hear one more that can drive the point home – which is something our readers would also enjoy.

Steve: Of course. Just remember, you asked! When I joined Cisco, we were at about a $50 Billion per annum revenue run rate. With approximately 200 working days a year, that’s about $250 Million per day! It was easy for me to identify initiatives that accelerated cycle time for closing sell-side agreements and justify the investment. Imagine if I cut that cycle time down by one day! My ‘incrementalist’ approach to these initiatives enabled change management to be appropriately internalised by those affected, and the business justification to get executive support was evident. This approach really opened my eyes to the concept you describe in your book, The Generalist Counsel. Btw, I’m still waiting for an autograph!

Be among the first 20 people to request a complimentary copy of The Generalist Counsel.  Please contact us to receive your book today.

As optimisations accumulate, opportunities for wholesale strategic shifts naturally present themselves – and the process does not need forcing. 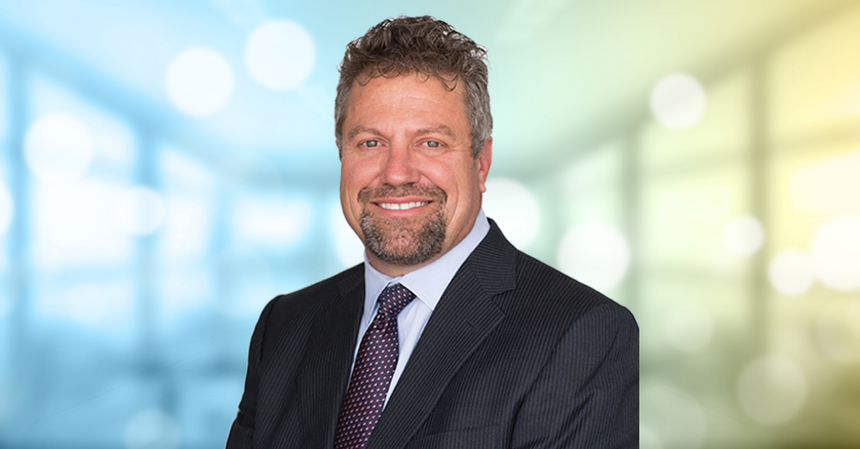 Why Is Procurement Starting to Run the CLM Show?
Prashant Dubey